Coindrawer is a “simple cryptocoin wallet and trading platform” that allows users to store and trade Bitcoin/Litecoin, as well as use merchant facilities to accept Bitcoin as payment for online and offline sales.

I am responsibly disclosing a persistent DOM XSS vulnerability that is exploitable at the time of disclosure. Coindrawer were notified of this issue 149 days ago as a submission to their Bug Bounty program. Coindrawer provided a reward for the submission, but have ignored my notifications that their fix for the issue is ineffective. Coindrawer were informed of my intention to publicly disclose this issue 14 days ago. This disclosure is intended to allow Coindrawer users to take mitigating measures to help ensure the security of their accounts and funds.

Impact: Medium to high (XSS can perform unwanted actions in the context of the logged-in user, such as steal funds)

Difficulty: Requires a medium to high level of user interaction (proceed through a checkout process). Attack might be able to be deployed to an invisible iframe - was not investigated. Attack is relatively unreliable - user account is not necessarily logged in when proceeding through the checkout process.

This vulnerability was discovered and reported to Coindrawer 149 days ago. Before or after this time, it could have been discovered by others and secret knowledge and use of the vulnerability poses a threat to Coindrawer's users and the security of their accounts and Bitcoin balances. By publicly releasing these details, the playing field is leveled and users can take action to mitigate this risk.

Until Coindrawer fixes this particular issue, potential measures that can be taken to mitigate the risks presented by this issue include:

Coindrawer and their merchant facilities

Coindrawer is a “simple cryptocoin wallet and trading platform”. Coindrawer provides a digital wallet service to store Bitcoin and Litecoin, a trading platform to trade Bitcoin for Litecoin and vice versa, and merchant tools to accept Bitcoin for online and offline sales. Coindrawer offers a mechanism to buy and sell Bitcoin for USD, but this feature has been suspended at the time of writing citing “banking and regulatory challenges”. Coindrawer claims to be “architected to deliver the lowest cost, most secure Bitcoin transmissions for purchases as well as Bitcoin transfers”.

Coindrawer's merchant facilities allow Merchants to create Payment Pages and Payment Buttons to accept Bitcoin payments in their checkout workflow. Customer payments are sent to the Merchant's Coindrawer account. The payment process is customizable, and the Merchant is able to specify URLs that the purchaser is redirected to upon successful or unsuccessful payment (Success URL and Cancel URL respectively).

When a purchaser begins the checkout process at a payment page, the merchant facility does the following:

Once the purchaser clicks Confirm Payment they are sent to the page /paycoin/ which repeatedly polls /paycoin/ with background POST requests as follows:

At this stage, a timeout is started, shown by a progress bar on the page. If the user fails to pay before the timeout expires, then the page is updated using JavaScript to present a Keep Waiting and Cancel button. The Keep Waiting button restarts the timeout and gives the payer more time to send the payment, the Cancel button sends the user to the Merchant's Cancel URL page.

If the user succeeds in paying before the timeout expires, then the page is instead updated to present a Return button that sends the payer to the Merchant's Success URL page.

When output to the page, this string breaks out of the href attribute of the a tag, closes the a tag, and inserts script tags to trigger a popup. 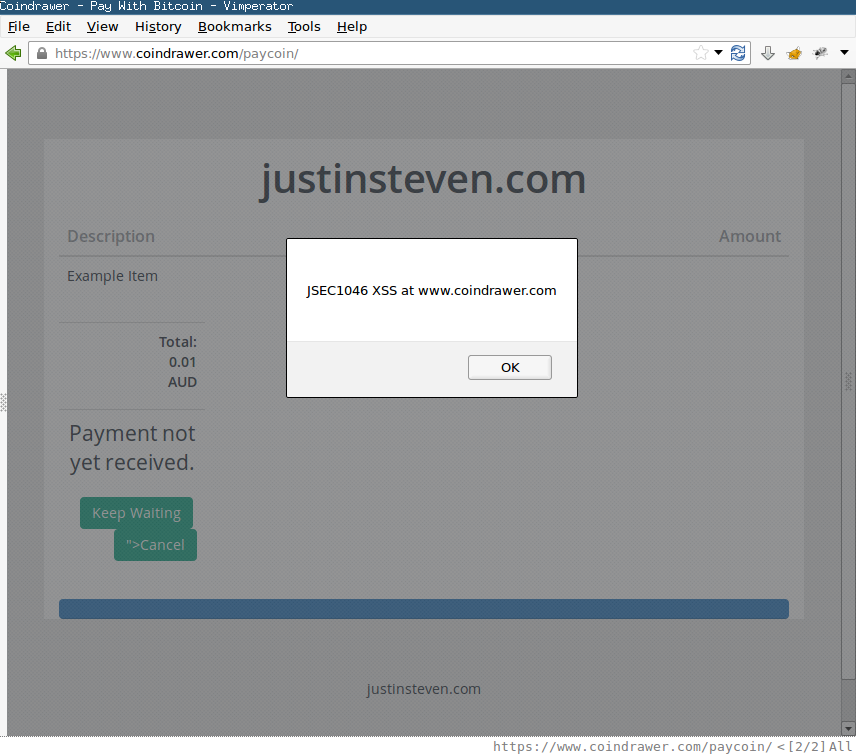 XSS can be used to perform unwanted actions on a logged in user's behalf, such as steal funds. Coindrawer's cookies are marked as HttpOnly, preventing cookie theft using JavaScript.

In my original disclosure to Coindrawer on 19 November 2013, I outlined two attack vectors that take advantage of the lack of sanitization on output to the page:

Coindrawer fixed the first vector in 2013, but overlooked the second. I sent several courtesy notifications of this omission after I received a Bug Bounty reward for the submission.

My communications with Coindrawer regarding this issue have been open and honest. They were made aware of my intention and reason for publicly disclosing the issue. As follows is the disclosure timeline. Coindrawer's actions are in bold.

Please refer to the mitigation recommendations at the beginning of this disclosure to help mitigate the risk presented by this vulnerability.